Spending almost 40 years successfully selling, servicing, and upgrading Twin Commanders isn’t coincidental. It takes a mix of knowledge, capabilities, and good customer relationships. These are keys to how Eagle Creek Aviation Services has been so integral to the Twin Commander community for so long.

Eagle Creek, based at Eagle Creek Airpark (KEYE) in Indianapolis, is the largest and most active Twin Commander service center in the world. Over the years the company has pioneered airframe, powerplant, and panel upgrades and STCs, sold countless airplanes, and serviced thousands more. 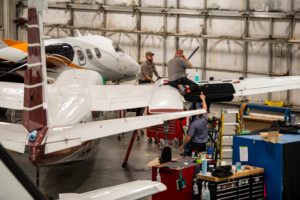 If a customer doesn’t opt for the full G950, the Garmin GTN 750 or GTN 650 is a good option for a navigator upgrade. And with the upcoming ADS-B mandate deadline on January 1, 2020, transponder work is keeping the shop busy. “There isn’t a common solution for the Commander, but many are opting for the Garmin transponder,” said Randy Morelock, Eagle Creek’s head of maintenance. From a simply one-off transponder upgrade to a full panel rework shows the range of expertise and capabilities at Eagle Creek. Morelock said the company can even design new panels with its in-house engineering staff, making Eagle Creek a one-stop facility for all avionics work.

With its history in Grand Renaissance conversions it’s clear Eagle Creek does extensive interior work as well. That capability is expanding even more with its new dedicated cabinet shop. The interior, panel, paint, and heavy maintenance programs all add together to complete Eagle Creek’s randome-to-tailcone Twin Commander refurbish program. Vice President Scott Dillon said they do all the major work packages on these airplanes, including a complete airframe refurbishment, as necessary.

Eagle Creek also installed the first set of five-blade composite MT propellers on the Twin Commander and have thus far completed five sets. It’s a program Dillon thinks has a lot of potential.

Aside from sales and upgrades, Eagle Creek has set itself apart with regular service. In addition to a $15 million inventory of parts at the Indianapolis complex and at its sister company, Naples Jet Center in Naples, Florida, the company helps to administer a massive inventory of parts in conjunction with Twin Commander Aircraft. Eagle Creek has a team of six people on site now at Twin Commander Aircraft inventorying the collection. In some cases they are breaking down larger assemblies to find more specific sub-components that contain parts numbers that would otherwise be impossible to source. Eagle Creek’s extensive upgrade program means they also maintain an inventory of hard-to-find core equipment that’s been pulled from older airframes, including voltmeters, fuel flow transducers, and more.

Eagle Creek also supports aircraft outside its physical locations with a responsive mobile AOG team. Sometimes that will mean putting a technician and a part on an airplane and flying to the East or West coast. If the customer is in the Midwest they may dispatch their AOG truck with its parts and tooling. That’s a service normally offered only for large turbojet aircraft.

Dillon and Vice President Rick Branch said their 20-plus years at Eagle Creek is a typical tenure. They said there are floor mechanics with even more tenure. If there’s a complex question or problem, Dillon said, “We have a background of 15 guys to talk to who have seen and done everything.” 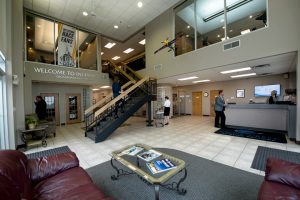 When you’ve been in the game for nearly 40 years you’re bound to make some friends and create solid customer relationships. Dillon said that many customers have been with them their entire 20-year run. Branch added, “Some of these airplanes we’ve resold four or six times over the years.”

Dillon had just returned from a trip hunting elk in Idaho with a customer. They flew in and out of remote strips with their trophy in the cabin. For Dillon it was a great example of the closeness of their customers and the capabilities of the airplane.

Eagle Creek has expanded far beyond its original Indianapolis location to include Naples Jet Center, where all the same Twin Commander services can be found, and more recently a pair of suburban Indianapolis FBOs at Indianapolis Executive Airport (KTYQ) and Franklin/Clinton County Airport (KFKR) that have been rebranded as First Wing Jet Centers.